Following Friday January 28th announcement that Two and a Half Men production would halt due to Charlie Sheen entering rehab, CBS is preparing its schedule to help the void feel a little less obvious.

Currently in its eighth season, Men is the most-watched comedy on television, averaging 14.7 million viewers, while it is second only to ABC’s Modern Family among the ad-coveted younger demographic of 18-49-year-olds. CBS sells 30-second spots in Men for more than $200,000, according to media buyers, generating more than $3 million per episode. Kantar Media reports that the show grossed CBS more than $155 million in ad revenue last season alone. Sources told The Hollywood Reporter that if Two and a Half Men is forced to shut down permanently, it could jeopardize as much as $250 million in domestic syndication revenue for producer Warner Bros. Television and millions more in lost ad revenue for CBS. (Source) 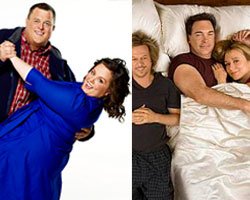 In scheduling news, CBS has 2 unaired episodes of the sitcom (Ep. 15 Three Hookers and a Philly Cheesesteak, and Ep. 16 That Darn Priest) which it will air as planned on Feb. 7 and Feb. 14. After that, CBS is planning to do more Men repeats than previously scheduled which will be combined with extra originals of some of the other Monday comedies. Freshman Mike & Molly (also produced by the same studio Warner Brothers and the same executive producer Chuck Lorre) which airs behind Men has been approached about producing 2 additional episodes beyond its 24-episode order. CBS confirmed that it has ordered two additional episodes of Sony TV-produced Rules of Engagement, currently in its fifth season, which airs on Monday and is scheduled to relocate to Thursdays next month. Also CBS has a new comedy Mad Love which will premiere February 14th. In spite of the schedule moves, Men repeats outperform first-run episodes of all non-CBS comedies besides ABC’s Modern Family. (Source)

In my opinion, CBS has a really tough job to do due to the production hiatus of Two and a Half Men. The Warner Brothers Studios sitcom is still the most watched comedy on television and it has helped to launch many CBS sitcoms such as The Big Bang Theory (also produced by the same studio and creative team of Men), Rules of Engagement and new comedy Mike & Molly. CBS still needs this sitcom in its schedule as it is a valuable player for the network. While the show’s issues are hopefully resolved soon, I think that the way CBS is approaching it schedule would work. Ordering more episodes of Monday sitcoms should help the network to keep Monday night alive with new programming. However I think that CBS should also try to air repeats of The Big Bang Theory, the second most watched sitcom, to help the comedies that air at 9:30 pm, and if possible, order 2 more episodes of How I Met Your Mother to keep the Monday night comedy with fresh new episodes. Let’s hope everything is solved soon and well, so that the cast and crew of Two and a Half Men can return to work doing what they love to do.